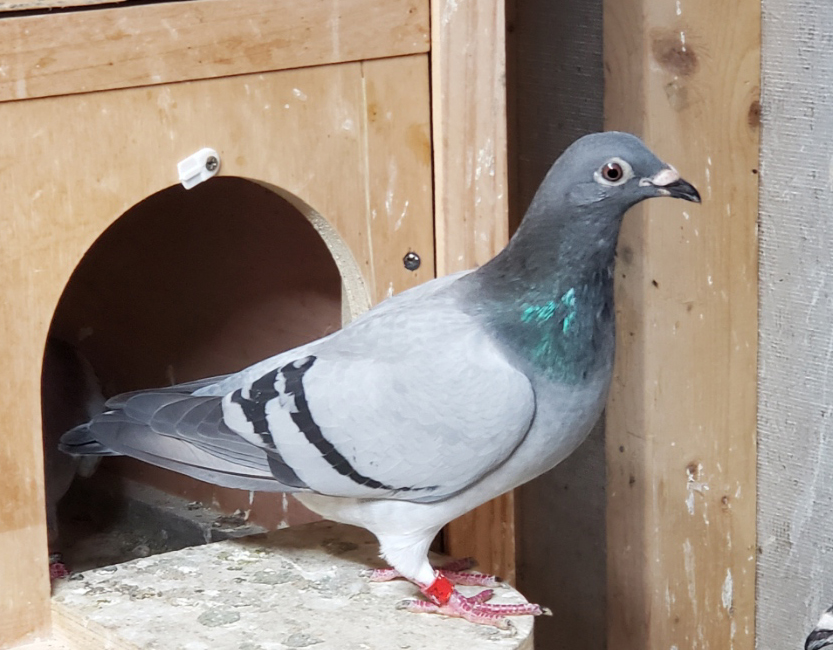 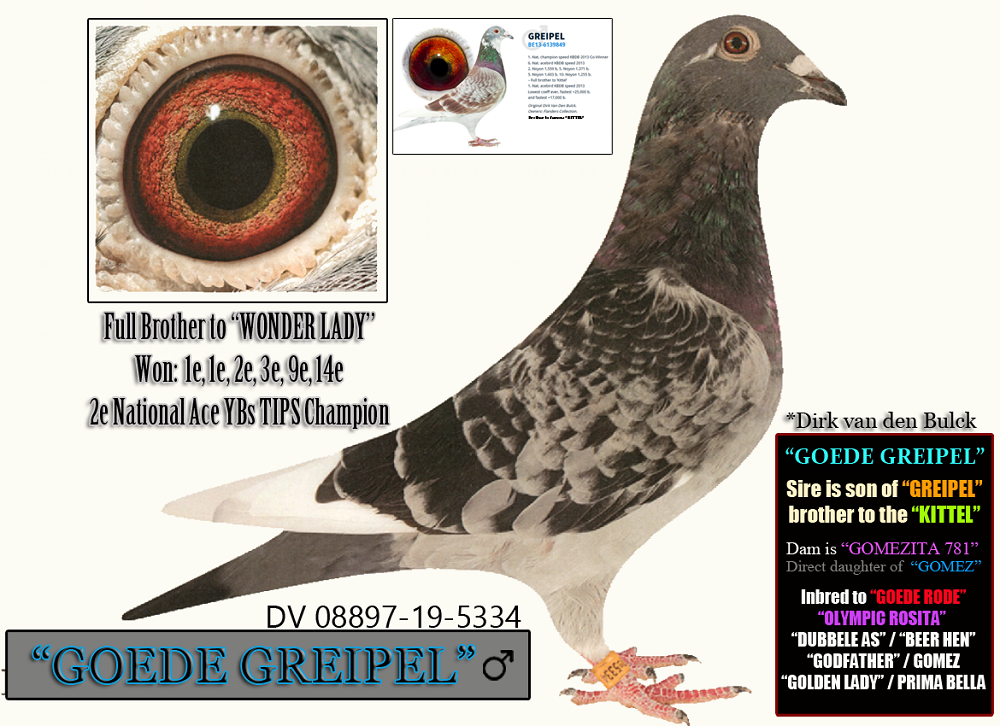 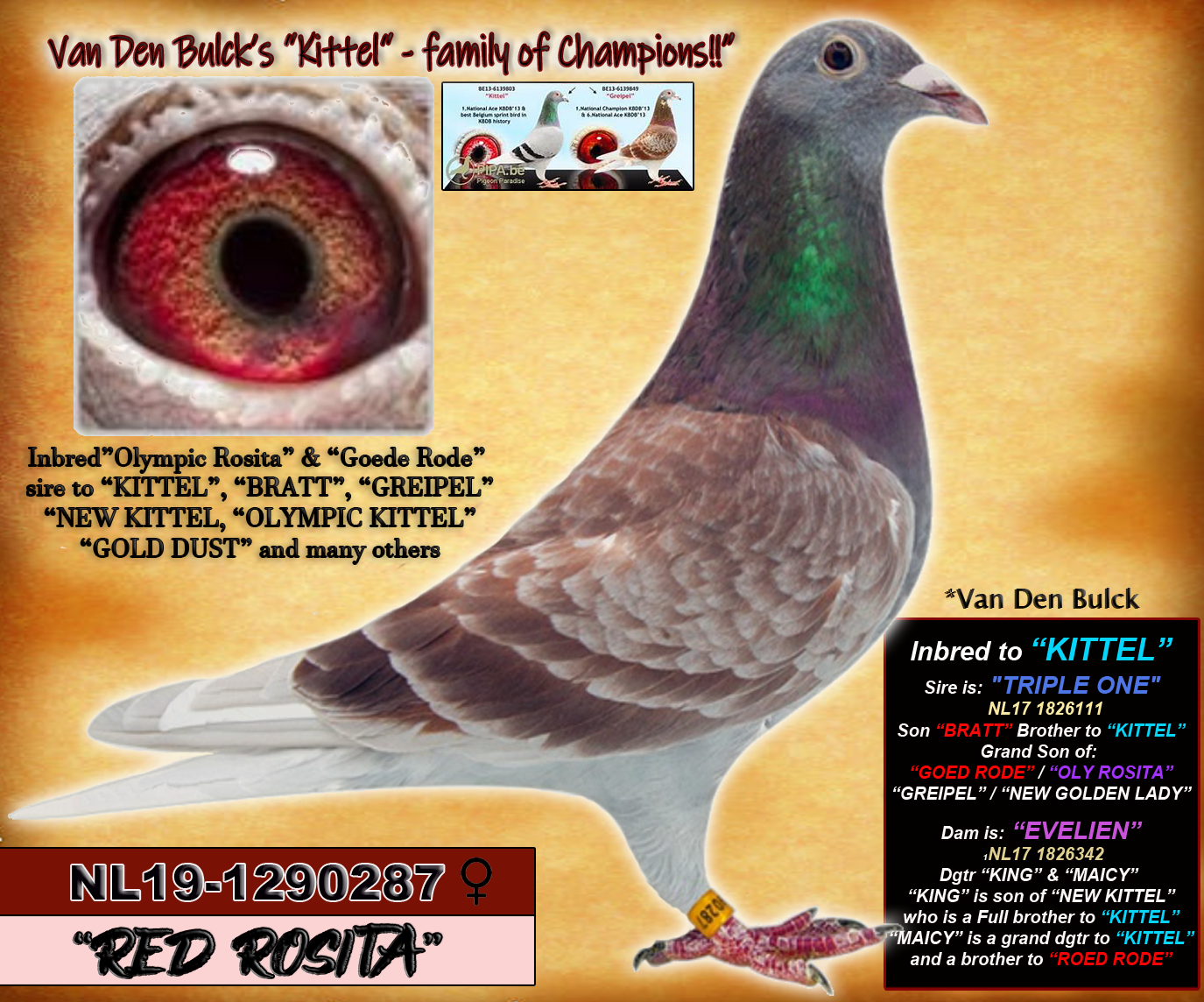 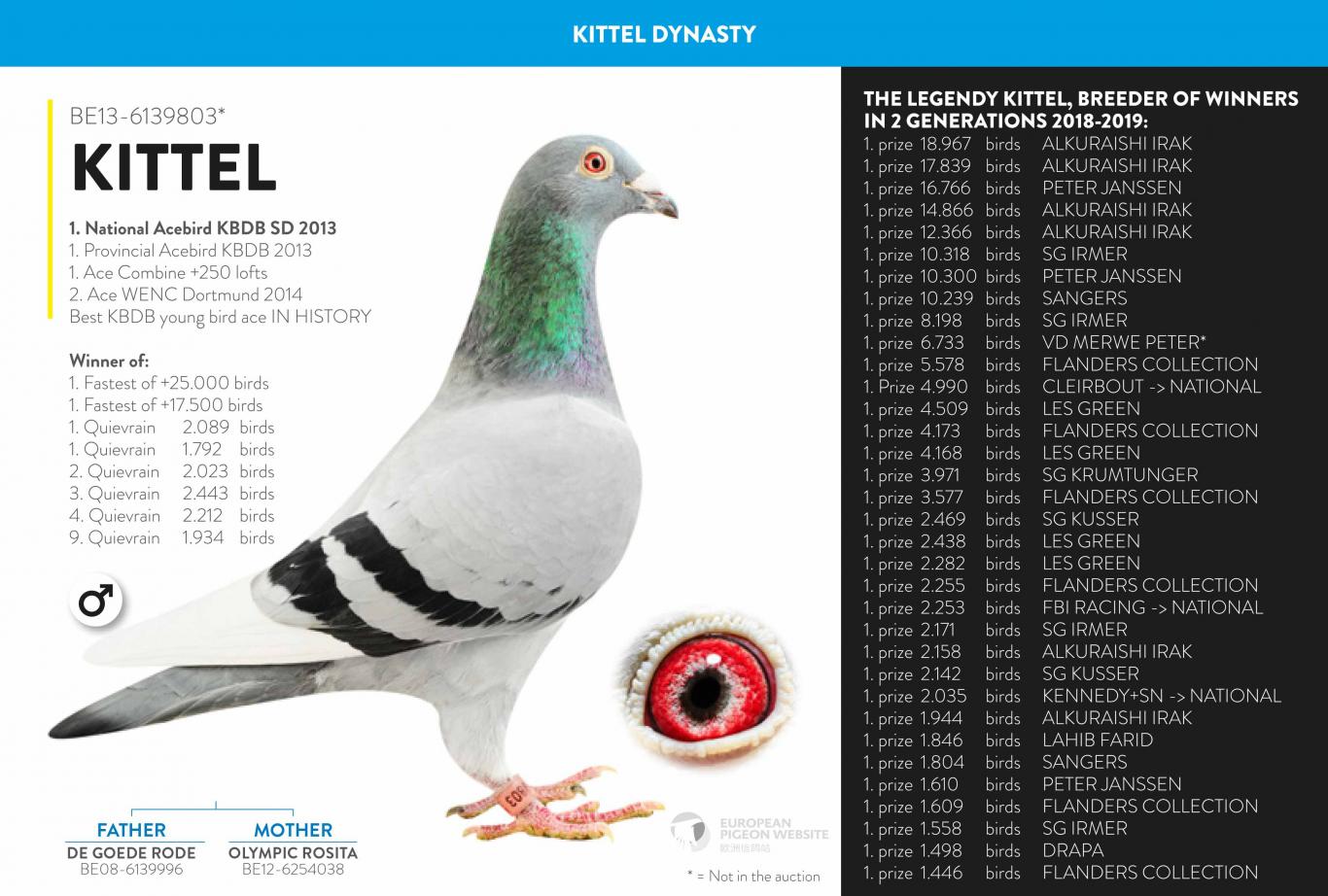 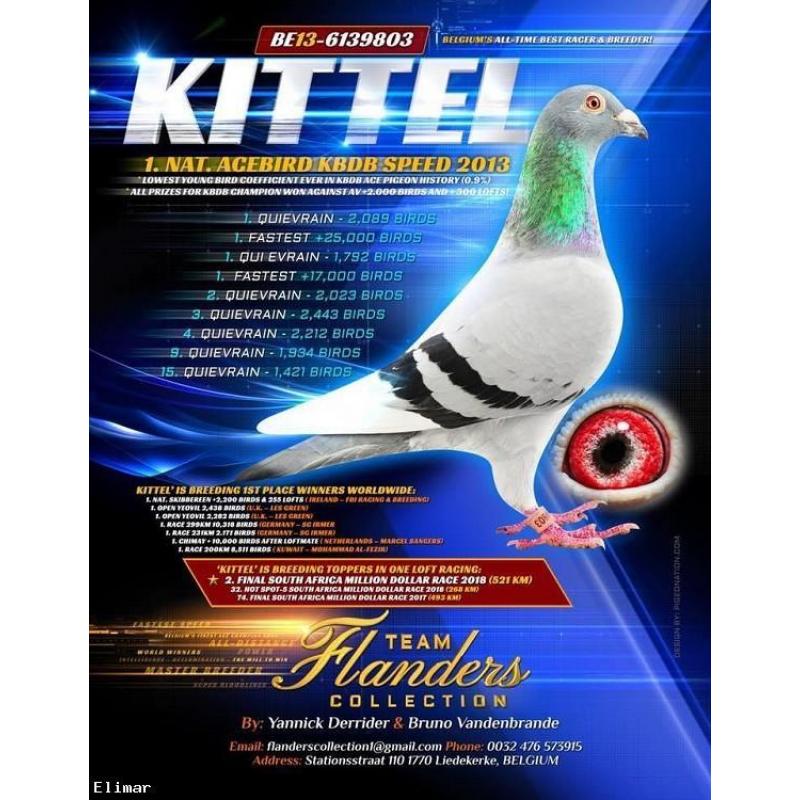 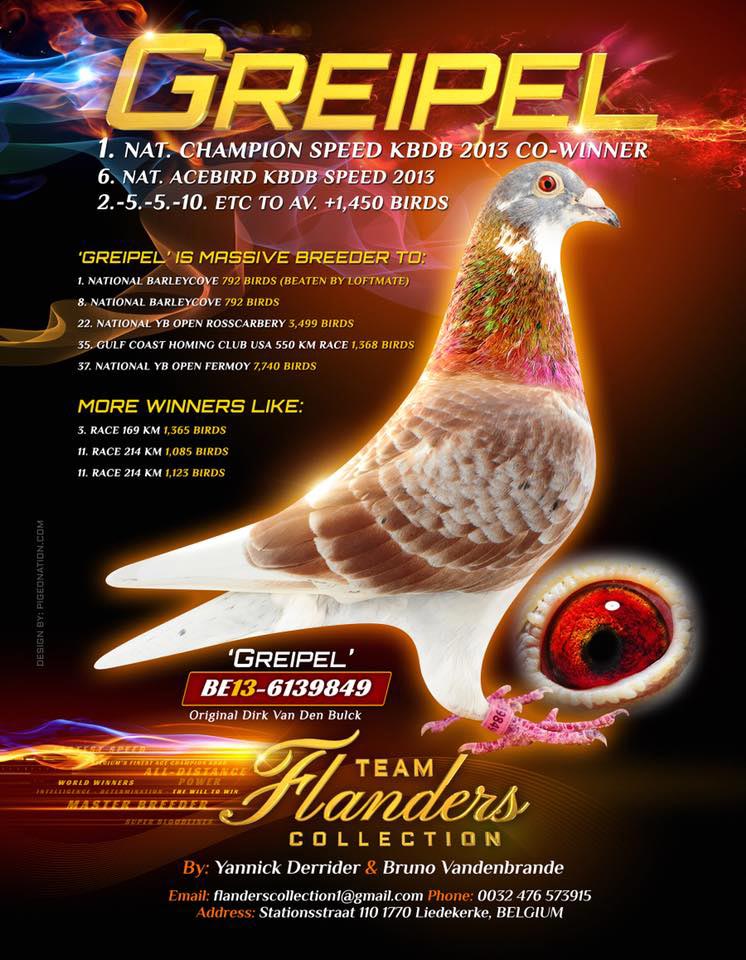 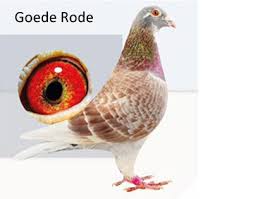 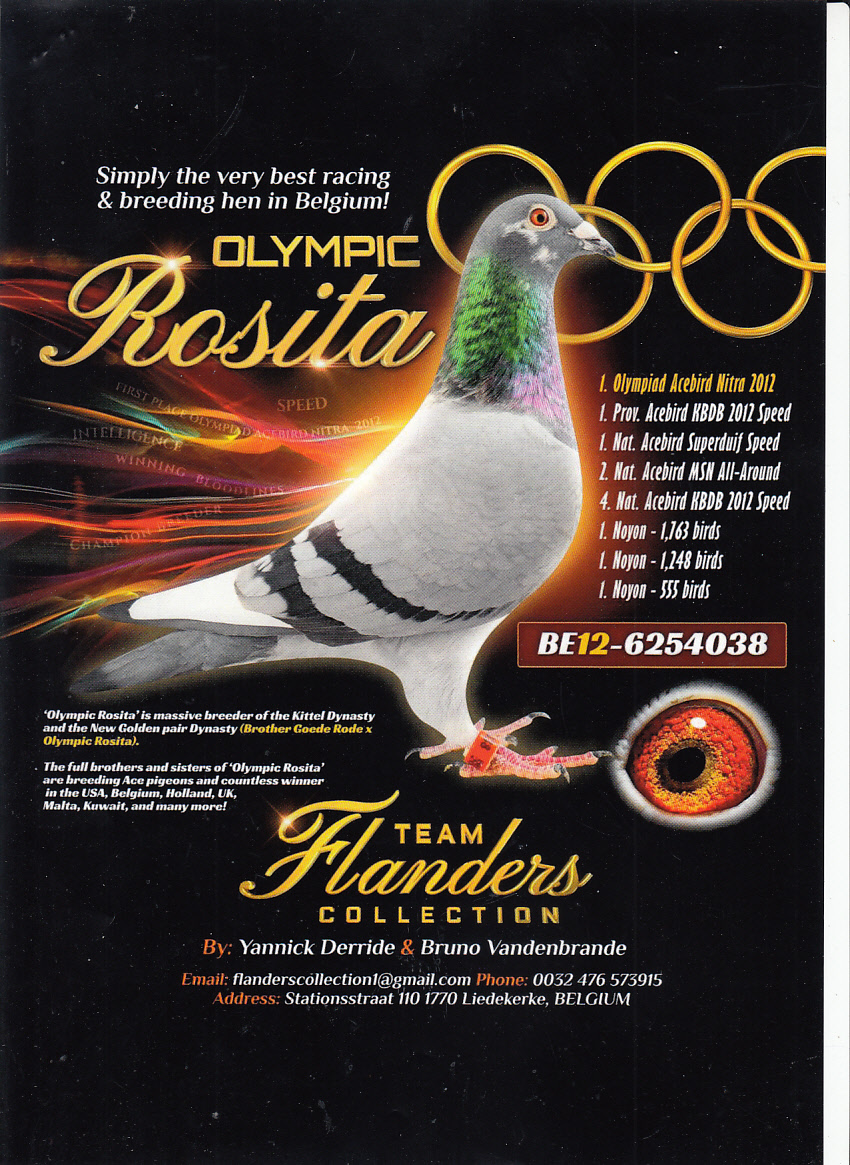 BLUE HEN - Van Den Bulcks BEST! - Van Den Bulcks bred to the best of the Kittel Family of birds. Look at the pedigree and you will see all the top Van Den Bulck birds throughout. If you want to add speed to your family this is the stuff that will do it.

THIS IS THE FASTEST FAMILY OF BIRDS IN THE HISTORY OF PIGEON RACING!

Dirk Van den Bulck decided in 2014 to sellhis pigeons, and Flanders Collection was the number candidate to obtain this sprint breed, which they could then incorporate into their existing De Rauw-Sablon collection. They obtained some of the finest pigeons available. The Van den Bulck dynasty is based on two key bloodlines, that of Goede Roede and that of Broer Goede Rode x Golden Leo 40000. It is worth noting that both these lines oringate from direct Leo Heremans pigeons. Goede Rode and Broer Goede Rode were bred from a daughter of the ‘New Dreampair’: Rossi x Eenoogske; Golden Leo 40000 in turn comes from a grandson of Olympiad 003.

GOEDE RODE
The bloodline of Goede Rode can further be split into the bloodlines of Kittel, Vale As, and Sagan.

Goede Rode and Golden Leo 999 are at the basis of the Vale As dynasty. This bloodline alone has managed to give an impressive 16 first prize winners against an average of 1,500 pigeons. This bloodline can also be found in the pedigree of the 2nd Nat. Ace Pigeon KBDB Shorter Middle Distance 2013.

This is the second most important bloodline of Van den Bulck. The combination of Broer Goede Rode x Golden Leo 40000 can be found in the following pedigrees:

Goede Rode was paired to Olympic Rosita, 1st Olympiad Pigeon Nitra, and together they bred:

Their descendants have won 17 first prizes against an average of 1,250 pigeons. Broer Goede Rode x Golden Leo 40000 are also the grandparents of Olympic Rosita, the pigeon behind the successful Kittel bloodline. This means this incredible sprint family has gone full circle.

Dirk Van den Bulck developed into one of the most successful sprint fanciers in Belgium in recent years, thanks to an impressive list of achievements: 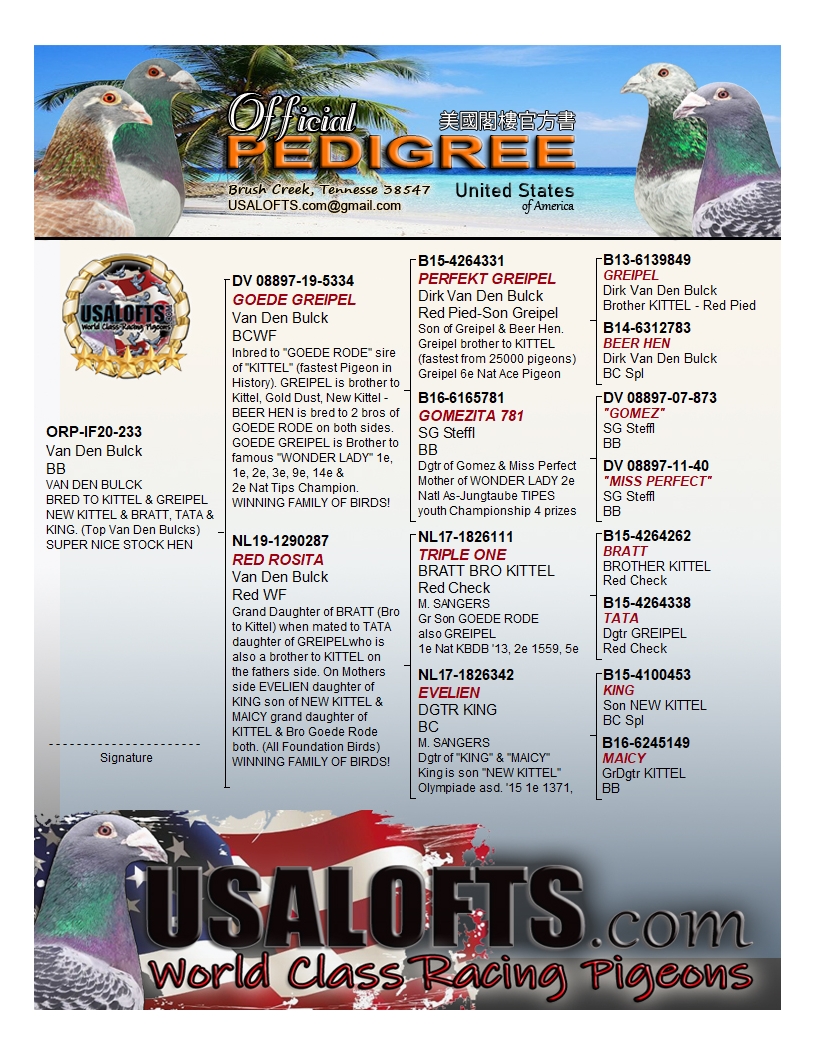 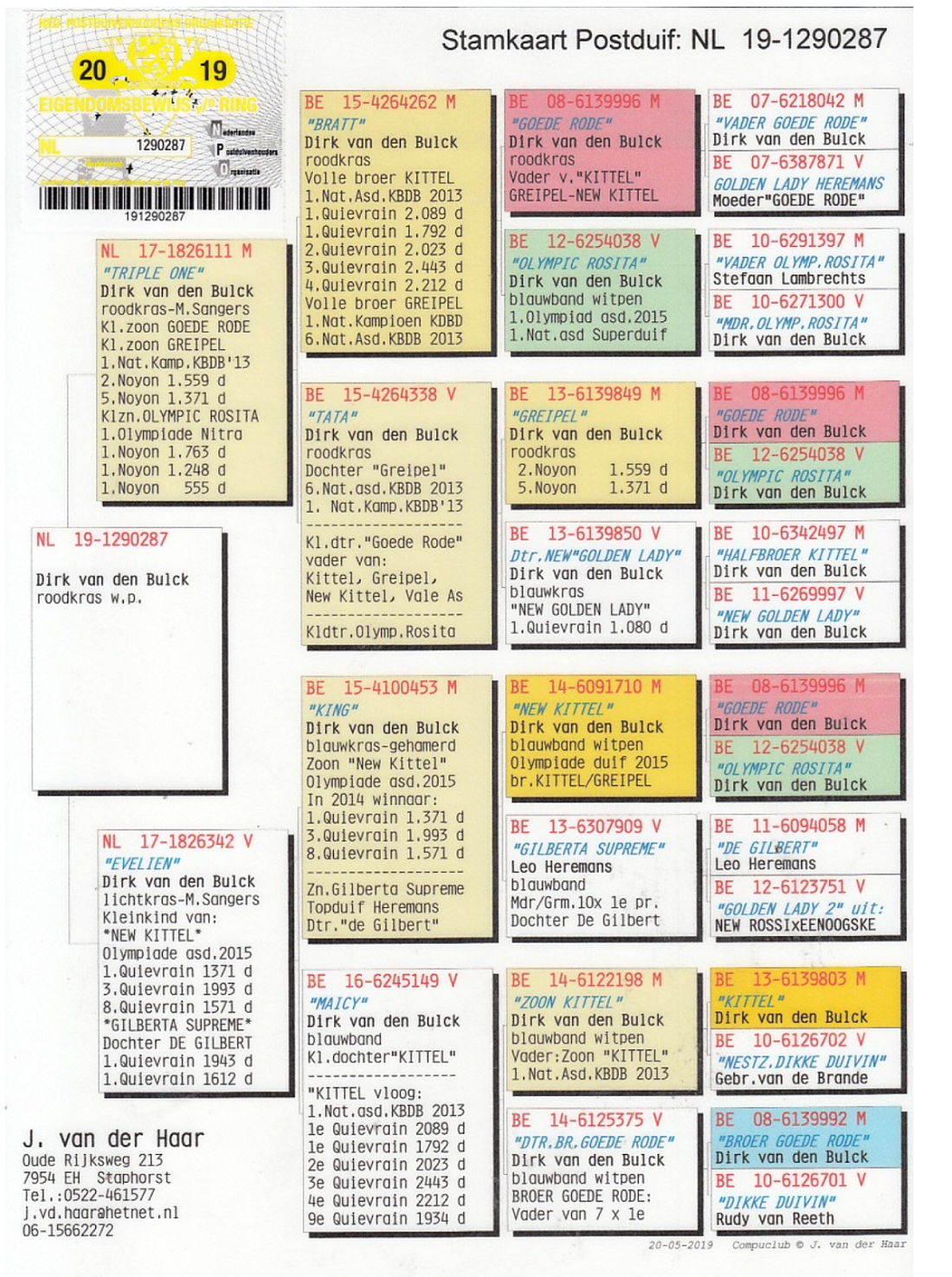 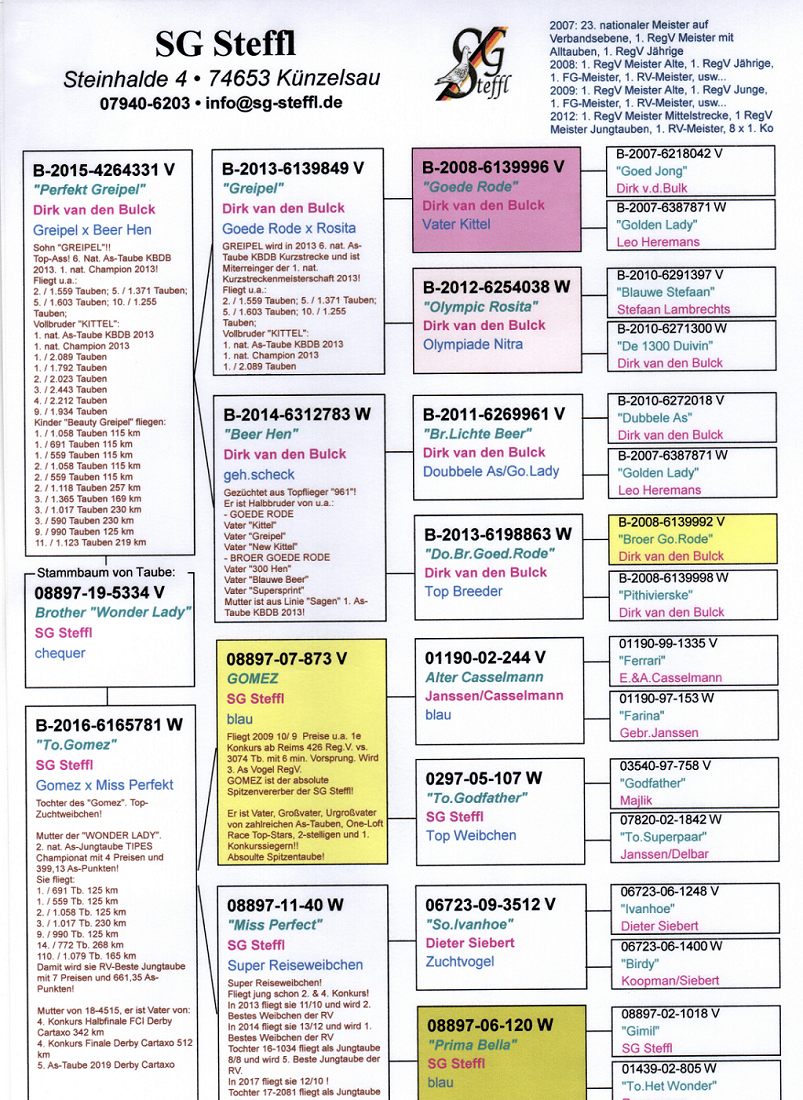 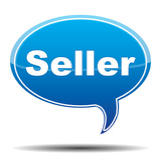 Add to Watchlist
Time Left
Auction Closed
Current Bid
-
Starting Bid
$ 500.00
Viewed by 162
Started 07/29/2021 01:03:00
Location
Brush Creek, Tennessee, USA
Auction TypeStandard
All times are central
View Bid History
Your Auction Has Been Posted!
Would you like to post another auction?
Posting another auction will copy some existing information over
Post Another Auction
I'm Done